Chaucer Gets a Makeover 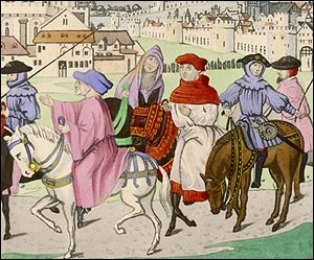 From the prologue to The Squire’s Second Tale:

"The pilgrims, with their holy duty done,
Set out for London ’neath an April sun
Which made their somber mood turn gay and light
For all around them shone the woodlands bright.
To Southwark rode the pilgrims, headed north
And from each forest branch the birds burst forth
In song. Uplifting was this to the heart,
And to the caravan it did impart
A sense of joy, till almost they’d forgot
Their sorrow at St. Thomas's sad lot."

These are the opening lines to the Squire's Second Tale, an 800-line Canterbury Tale which I wrote for the Chaucer module of my master's degree in creative writing. Set in Germany during the Crusades, this bawdy tale involves knights, castles, princesses, chastity belts, and most importantly of all, a locksmith whose morality leaves something to be desired.

At the time I wrote it, I had no idea that my Canterbury Tales project would become a major part of my life. Yet when I recalled the struggles I had as a student getting to grips with Chaucer, as well as the fact that the great poet only completed a fraction of the stories he envisaged, the more I wanted to make an addition to Chaucer's Canterbury Tales.

The Squire's Second Tale made the short list at the 2007 Canterbury Festival's Poet of the Year Competition, and it was another two years before one of my Canterbury Tales was published in its full text.

Robin Hood - Stone the 'Crowes': How to Market 'The Monk's Second Tale' 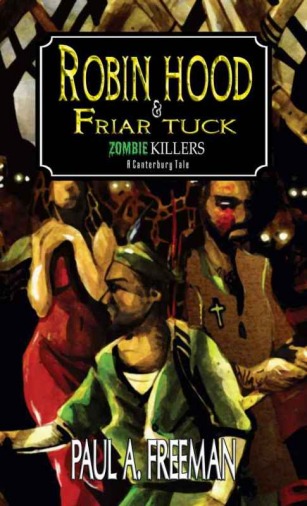 In 2009 I wrote a contemporary narrative poem for an anthology of zombie poetry published by Coscom Entertainment. The owner / publisher, A.P. Fuchs, was impressed. He told me that if I could write 18,000 words in a similar style (i.e. in rhyming couplets and iambic pentameters) and on a similar theme (i.e. zombies), he would publish it as a stand alone novella.

"Can I set the tale in medieval times?" I asked.

So I took Mr Fuchs up on his offer and began work on what I believe is the first Canterbury Tale published in over 600 years.

Set in the Middle Ages, at the time of the Great Crusade, I weaved into my zombie tale the legendary outlaw Robin Hood along with fragments of myth chronicling his exploits. And before anyone raises an objection to my use of an iconic English hero, just remember that Chaucer's Wife of Bath told an Arthurian tale.

One qualm I had was that a supernatural theme such as an outbreak of zombism might prevent my work being taken seriously by Chaucerians. Yet didn't the Pardoner introduce a personification of Death in his tale?

My main concern however, was putting a title to my 80-page epic. The Monk's Second Tale could do as a secondary title, but the main title required something with flair. Thus the awesomely titled Robin Hood and Friar Tuck: Zombie Killers - A Canterbury Tale by Paul A. Freeman was born. Due to Coscom Entertainment being a horror imprint, the title was aimed primarily at attracting fans of what's popularly known as Z-Lit. However, when all is said and done this narrative poem is simply the second Canterbury Tale told by the Monk, and hopefully any Chaucer scholar reading this will understand that.

Below are links to the publisher's webpage for The Monk's Second Tale and a link to Amazon's 'look inside' facility where you can read the first few pages of the novella.

And here are three recent reviews - from Booksy, the worldwide Robin Hood Society chairman and Bitten by Books, respectively:

So, without further ado, if you haven't clicked on the Amazon link, below I give you an excerpt from Robin Hood and Friar Tuck: Zombie Killers (aka The Monk's Second Tale):

Is Chaucer Happy about These 'New' Canterbury Tales? 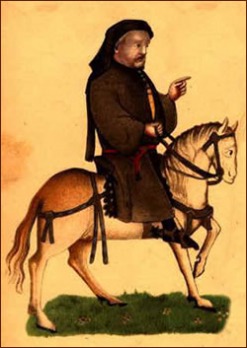 Chaucer
Hey! Look! Is Chaucer wagging a disapproving finger at me for trespassing on his turf? Or is he berating me for having the temerity to chronicle the return leg of his pilgrims' journey to Canterbury?

Actually, I'm sure Chaucer wouldn't mind at all. For although some Chaucerian scholars may consider The Canterbury Tales sacrosanct, I believe if Chaucer were alive today he would encourage a fellow storyteller and poet to carry on where he left off. And since Chaucer didn't complete even half of his envisaged tales, I'm certain he would be happy for another teller of tales to fill in some of the gaps in his unfinished works.

So now we've got that out of the way, read on to discover how far I've gone with my 'new' Canterbury Tales project.