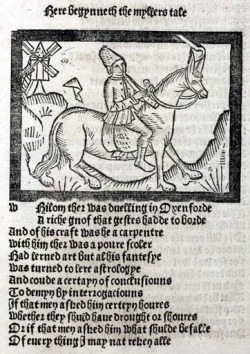 The Miller
At school I studied The Miller's Tale, so I desperately wanted to do the naughty old Miller some justice. The chance came when I wrote a bawdy, 40-line abridged version of Rapunzel.

In the original edition of the Brothers Grimm Fairy Tales, Rapunzel innocently gives away her relationship with the prince when she asks her captor, Gothel the Witch, why her dress is getting tight around the belly. In later versions she asks in a moment of forgetfulness why Gothel is easier to draw up to her room in the tower than the prince, thus sanitizing the tale almost from its inception.

For my alternative Rapunzel story I portrayed the long-locked maiden as a young village girl who is a little too free with her virtue. Therefore Gothel, her mother in my story, locks Rapunzel away in a tower where she is wooed by a blacksmith's son in the guise of a knight. Suffice to say, the ending is not what the Brothers Grimm or their censors envisaged.

At 600 lines, or 4,500 words, The Miller's Second Tale is the shortest Canterbury Tale I've completed so far. It's also hopefully the second to find a home, and is currently being prepared for a proposed publication in the Brepols MiscS series. This anthology of neo-medieval creative writing is being edited by Dr Lesley Coote, a lecturer in Medieval and Renaissance Studies at Hull University, and editor of Wordsworth Editions The Canterbury Tales.

In this excerpt from The Miller's Second Tale, Gothel is made aware of her daughter's free and easy ways. And as the Miller warned in his first tale, it isn't for the faint-hearted:

The Monk
Since The Monk's Second Tale was a commissioned piece, there were certain publishers' guidelines that needed following. Coscom Entertainment wanted the tale to be around 18,000 words in length, about the length of Chaucer's Knight's Tale. It also soon became apparent that a catchier title than The Monk's Second Tale was needed if we were going to market the story to Coscom's Zombie-Lit fan base - hence the more eye-catching title Robin Hood and Friar Tuck: Zombie Killers - A Canterbury Tale by Paul A. Freeman.

As for featuring Robin Hood in my tale, after researching the fragments of myth and legend surrounding Robin of the Hood and his cohorts, I decided the characters, along with the period in which they lived during the Great Crusade, would make the perfect backdrop to my 'zombie' tale.

As I showed earlier, from the link below you can access and preview a 6-page extract using Amazon's 'Look Inside' function, or the first chapter (10 pages) if you preview via the Drivethruhorror link

Below in this excerpt from Robin Hood and Friar Tuck: Zombie Killers, Robin reacts with incredulity to Friar Tuck's story of a zombie plague, until.........:

The Prioress is Less Controversial in her Second Tale 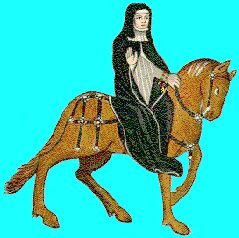 The Prioress
There are several 'abridged' Canterbury Tales waiting to be expanded, and one has recently been finished. This is The Prioress's Second Tale, the story of a destitute Cumbrian lass who gets kidnapped by a wicked witch. The gist of the narrative is much in the vein of Hansel and Grettel, though as with The Wife of Bath's Second Tale I felt that a medieval story detailing female empowerment was long overdue.

The tale also highlights current trends in human trafficking and the commonly held belief in urban areas being 'greener pastures' - a belief which has led to uncontrolled rural-urban migration.

Since the original Prioress's Tale is a study in anti-semitism, from a period in history of almost zero religious tolerance, I chose to give the Prioress a kinder story the second time around, part of which is below. In this excerpt, Annabel, a poverty-stricken child, is kidnapped whilst herding pigs in a forest often frequented by Zelga the witch: 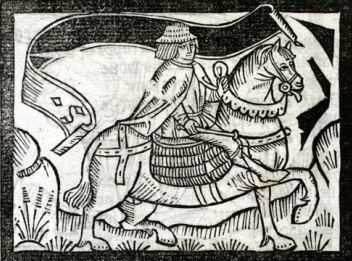 The Haberdasher
The Haberdasher (Hat-Maker) is one of the 'orphan pilgrims' of the Canterbury Tales, meaning that although he appears in The General Prologue, Chaucer never actually got round to allocating him a tale.

The other 'orphan pilgrims' are the Carpenter, the Weaver, the Dyer and the Tapestry-Maker. All of them are members of a fraternity (a guild) and wear an identical livery. With them they have a Cook, who ironically does get to tell a tale, even though only a fragment is told before the text breaks off.

The advantage of using an orphan pilgrim is that I am not bound by Chaucer's original text as to details of the Haberdasher's personality and history, and am therefore free to make the character I wish to portray him as fit the tale he tells.

The Haberdasher tells the tale of an English Troubadour-cum-football-hooligan who is tasked with cheering up the King of Ghent.