One of my Earliest Short Short Stories - Just 150 Words 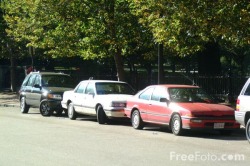 The getaway car skidded to a halt. Jack grabbed the money from the back seat and sprinted off. His own vehicle was parked nearby.

Cursing, he threw the loot into his vehicle, started the engine and reversed carefully into the Toyota. It didn’t budge. He put the car into first gear and drove gently into the rear of the Ford. It, too, didn’t move.

The street seemed deserted, so Jack took a wheel spanner from his trunk and smashed the driver’s side window of the Ford. Reaching in, he disengaged the handbrake.

He returned to his own car. As he nudged the Ford forward there came a tap at the window.

“Smile,” said a man with a microphone. “You’re on Candid Camera!”