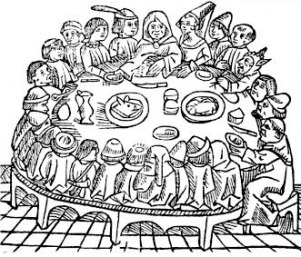 A Medieval (Low Table) Feast
To write The Squire's Second Tale I had to overcome some inhibitions, for since I had a fabliau in mind, it would require both fruity language and bawdy action.

One read of Chaucer's Miller's Tale put my mind at rest, though. If the Father of English Poetry could use 'arse', 'fart' and 'piss', why couldn't I incorporate similar language. Thus, in The Squire's Second Tale, the evil maid-in-waiting, Jane, having been tricked into drinking a laxative, rushes to her lover, the Apothecary's bedchambers, where:

Arriving at the ’pothecary’s door
She rapped and cried, and in distress did roar
And beg her paramour, “At once admit
Your dearest Jane, for I’m besmirched with shit.” 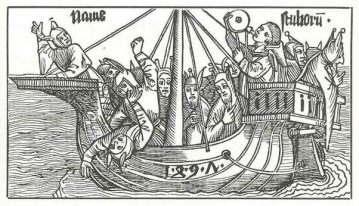 The Ship of Fools
Next came The Shipman's Second Tale, a story about the 'fabled Babel Fish' which has the power of speech. When Adam, a poverty-stricken fisherman, captures the fish, he promises:

“I’ll harm you not, oh strange aquatic beast,
Nor let my wife transform you to a feast.
To me you are more valuable alive,
And with your precious help once more I’ll thrive.
For talking fish are rare and folk will pay
To hear the words of wisdom that you say.” 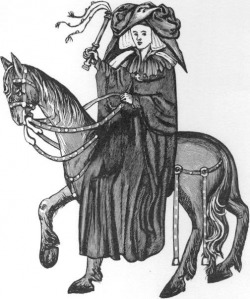 The Wife of Bath
Tackling the Wife of Bath and a tale of female empowerment in medieval society was a challenge, for by Including such an eponymous character in the prologue and epilogue to The Wife of Bath's Second Tale took a great deal of research and reading. The story itself is about a thatcher's daughter, Gwendolyn, who battles against the odds to better herself through education and by learning the  courtly knowledge of being a lady. Below is the Wife of Bath introducing her second tale, her introduction coming after a bout of lively banter between herself, the Shipman and the Host over the merits of marriage:

And knowing this, the cheeky Wife of Bath,
Who sat ensconced beside the tavern hearth
With one hand cupped against her hearing ear,
Quod, “Captain, sir, of women have no fear.
I note retirement from the sea doth loom
By your advancèd looks. And if no broom
Is nestling in your home to sweep and clean,
Then find yourself a spouse – one not too lean,

The Doctor of Physic
Returning to my roots as a crime writer, I chose the Doctor of Physic to tell the story of Friar Ted, a crime-busting mendicant. Famed for his skills of detection, when he finds a stranger dead on a lonely road, he invokes his special talents to uncover the culprit. In the excerpt from The Doctor Of Physic's Second Tale below, Friar Ted examines the body of the dead man, searching for clues as to where he is from and why he was killed:

Then Friar Ted drew near to scrutinise
The dead man’s clothing with his searching eyes
And noticed that the turquoise cloak he wore,
(Although bespattered here and there with gore)
Was of the finest continental weave.
“’Tis Flemish by its texture, I believe,”
The Friar Quod. “Most richly is it dyed.
Indeed, this traveller took the utmost pride
In how he dressed, since also, on his feet,
Are fur-lined boots designed to keep the heat
From leaking out into the frosty air.
Which begs the question if a man should wear 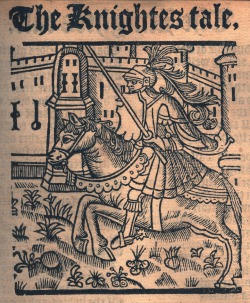 The Knight
For my next Canterbury Tale, The Knight's Second Tale, I created the caddish Sir Goldenlocks, an  Arthurian wannabe knight, ladies' man and dragon slayer.

Goldenlocks rises through the ranks - from Page, to Squire, to Knight - due to the untimely demise of his two previous masters. Their deaths are caused largley by Goldenlocks's cowardice, negligence and machinations whilst in the field dragon-hunting. However, since no one sees his cowardice, his heroic account of events is all that those at Camelot get to hear.

For me this was a landmark Canterbury Tale on two counts. It was the first for which I initially wrote an abridged version (this is now a standard practice), and it was the first 'new' Tale to reach a large audience. In May last year, tentatively titled 'The Miller's Second Tale', the abridged story of Sir Goldenlocks was published on the Everyday Poets website.

In this excerpt from The Knight's Second Tale, Goldenlocks explains to Sir Tamarind (a Mongol mercenary, and his second master) how his first master, Sir Troy of Walthamstow, was killed by dragons: