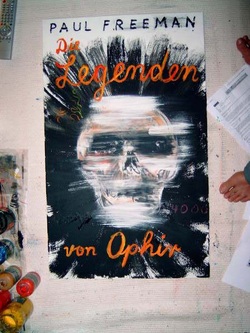 Cover of 'Die Legenden von Ophir' plus the artist's feet
When Frank Nowatzki of Pulp Master contacted me over my debut crime novel Rumours of Ophir with an offer to publish the book in German translation, I jumped at the chance.

As luck would have it, Frank called just as I was finishing work on the first part of a trilogy of crime novels set in Saudi Arabia. Frank liked this initial installment - titled Vice and Virtue - and secured its German territorial rights. 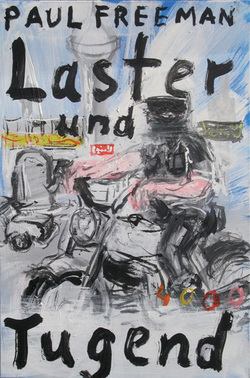 A bootlegger dies in a car bombing in Saudi Arabia, leaving many unanswered questions. Is the dead man a victim of the notorious religious police (the so-called 'Vice and Virtue Men'), or is he the victim of rival bootleggers involved in a turf war?

When the death of a second murdered bootlegger implicates the hand of Islamic fundamentalists, Maddox digs deeper. Then, as the body count rises, he realises all is not as it seems.

Can Maddox survive attempts to silence him? Can he bring the vicious murderers to book? Can he unmask the mastermind behind the gruesome ‘Bootlegger Murders’ and uncover the truth?